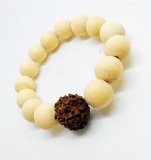 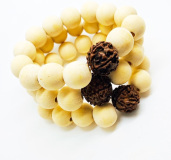 Whitewood beads come from the wild mamalis (pangantuon) trees growing in the Philippines. It is a natural whitewood. The wood is bleached, washed, and dried thoroughly to preserve the natural ivory to off white color. This results in beautiful beads with a nearly perfect finish.